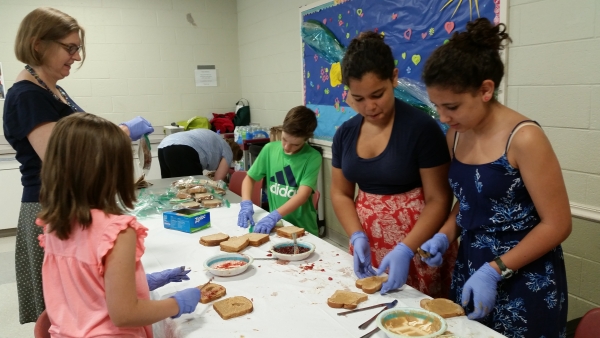 The Second Tuesday Grate Patrol, launched in March 2015, offers up food and fellowship in partnership with The Salvation Army National Capital Area Command, to people who are homeless and in need in seven-plus locations in downtown Washington from The Salvation Army’s canteen van. St. C’s takes its Grate Patrol name from the evening of the month (the second Tuesday) that St. Columbans serve the meals that other St. Columbans have purchased and prepared.

The Salvation Army Grate Patrol has been delivering an evening meal 365 days a year in downtown Washington to people in need for more than twenty years. St. C’s joins 24 other faith, business and civic groups, including five other Episcopal churches and one Episcopal school to partner with The Salvation Army.

There are three ways to serve in this vital ministry: Shopping for the food, helping to prepare the meals, and volunteering to ride the van and serve the meals. Volunteers sign up for a one-time commitment in a given month. Families have strongly embraced all three service opportunities.

The Second Tuesday Grate Patrol is a family-oriented sandwich-making effort offering food and fellowship to people who are homeless and in need in downtown Washington; a partnership with …

We’re glad you’re here. St. Columba’s is a church on a mission to Live God’s Love. Our parish community is a vibrant one that encourages spiritual curiosity, celebrated children and youth, and embraces the world in the spirit of God’s Justice and love.

Walk with us during these uncertain times as we encourage spiritual curiosity, celebrate children and youth, and embrace the world in the spirit of God’s justice and love. How can we serve you today?

Thank you for your generosity this Christmas.